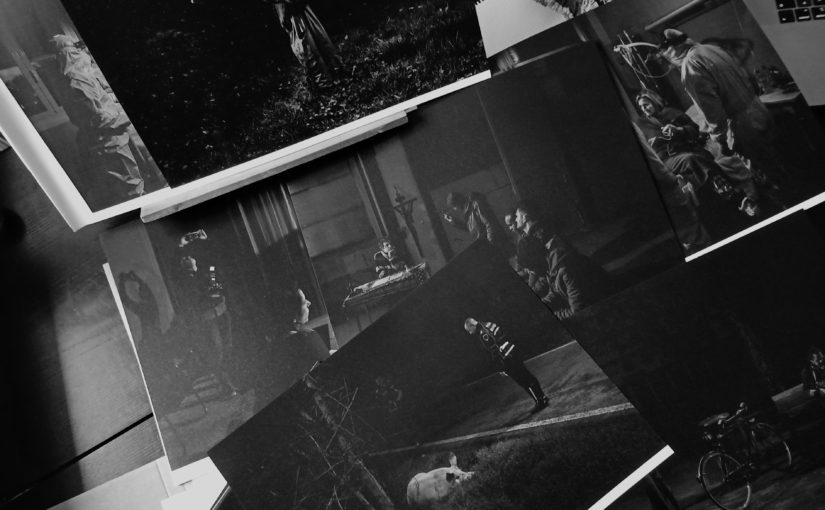 I am comfortably reading OPERA APERTA  in Alex’s studio. A few assistant photographers walk around me and are busy. Outside, in the court, more photographers are reunited around a 12 meters long composition of tables to talk things through and take decisions.

I have made myself feeling I have all the time of the world and in fact I feel happy to be here and to get to opening the book… I completely isolate myself with my selected music on my ears.

The written piece in Act 2 is in English: it is an argumentative and historical philosophical text on Artaud and contagion : “Artaud, Germ Theory, and the Theatre of Contagion” dowloaded from the web.

I smile because I have been reading Artaud again and even printed, right last week, very small, just for myself: a sentence by Artaud in its original French version and its translation in English, some drawings by him that I had never seen, and especially a portrait of him by Man Ray, all on baryta paper as they deserve! And contagion is a word I also have used in my mind in a wider meaning outside the strictly medical one; the text in Act 2 synthesize it perfectly: contagion as a metaphor for disruption and creativity.

Who is Artaud? Here a picture of him, in a series of quotes from the web and a few selected extracts of different wikipedia introductions on him:

Antonin Artaud, died in 1948 at the age of 51, is a landmark in both the practical and theoretical fields of theater aesthetics worldwide: many famous leading figures of a revolutionary theatre point to the the landmark Artaud. In philosophy, in those fields of investigations around the boundaries between philosophy and the arts, he was made famous by the homage paid to him by Michel Foucault, Jacques Derrida, Susan Sontag and he is undergoing a process of canonization. (Artaud’s Holy Theater:
A Case for Questioning the Relation between Ritual and Stage Performance Dietrich Harth)

All his life, he fought against physical pain, diagnosed as hereditary syphilis, with medication and drugs. …. He also underwent a series of electroshock treatments during successive internments, and he spent the last years of his life in psychiatric hospitals, notably that of Rodez. In his immense work, he makes art delirious (as Gilles Deleuze, great reader of Artaud, will make delirious the theory around the body without organ). (French Wikipedia). He believed that the text had ended up exercising a tyranny on the show, and pushed instead for an integral theater, which would include and put on the same level all forms of language, merging gesture, movement, light and word. (Italian Wikipedia) He conceptualized the Theatre of Cruelty movement with essays and plays, and wrote experimental texts with themes of introspection, mysticism, drug use, unorthodox politics and his experiences with schizophrenia. (English Wikipedia)

“It has not been proven, far from it, that the language of words is the best possible. Antonin Artaud”. Quotes the Spanish wikipedia.

I am happy to read this text…although difficult and full of data especially those on the history of germ theory that I know I will not retain, if not as a general idea… I go fully for it anyway.

When I get to this sentence: “repudiation as a form of productive relationship”.  I stop. Copy it on my notes. It hurts me, to tears! “Fuck! I am crying”!  The sweetest assistant on earth puts some napkins next to me without me even realizing; I find them after a while…

Repudiation indeed is an interesting word. Cruel at first to me and I think to many, because it obviously leads to the image, in my mind, of women abandoned and humiliated through this abandon … but this is only one meaning.

Repudiating is to refuse to accept. Which is interesting. I know I go nowhere, and still I question myself: What a relationship has to do with production? What is a relationship if not a love relationship?

Outside power, I am trying to sinthetyze my answer: relationship is the growing together, the helping , the sharing…the building the surviving together…definitely a making and a doing; all forms of love, I guess. Outside power.

I grok about 60% of the text at first, then a bit more…The fact that it is such an un-accessible text annoys me a bit…and again this is revealing … how much knowledge and which knowledge do we need, to be fine in our world?

What this text is saying is:  we should find new ways of theorizing individual and collective bodies.

Theorizing … Let’s see … I think I know this: we have just suppositions of what an individual is and what a collective is. (Even if we do not question ourselves).   For groups, we give various names: mainly we like to call it family… we are pretty busy trying to define existing, ever existed, for ever existing groups …I think too busy to historicize them and institutionalize them: we seem to need to own an identity, the feeling of a provable belonging, an affiliation, a membership, to name a few associations. A church, a nation … we fools! We are not ideas of power.  (And we are always alone) . We probably should be more busy in inventing relationships, let them be and most of all, we should be busy in finding ways of feeling free in them …Simply: talk to your neighbor! kind of …

Freedom is active work. (And one of Alex’s favorites about freedom is from an Italian songwriter: freedom is participation. Giorgio Gaber). The collective is a great (revolutionary) strength. That’s facts.

I am only half way through the book, but I decide to look at the photocopies that lye at the bottom of the box containg the various parts of which the book’s body is conceived. They really surprise me: the paper and ink are fixed on a fragile surface, the blacks create little abstractions and distractions. The black is gray. The paper is only similar to that of an ordinary document arrived in the mail. They seem the cheepest pages of the book, grabbed together infact with a simple big pin: what I am sure is that there is a precise choice.

In these last fragile pictures the constant I see is a gesture: a blink of “love transmission” between the person at center of the scene and the humans “contained” in those funny unreal and yet so now common hospital white protective suit. The very last picture reminded me of a woman I know, she is, to me, a mother feeling she should be by her child.

I am not trying to understand why the book is made this way, how each choice was made in such a variety of materials, and with an overall design complexity (I will get that later probably):  for now I just go through the book and observe how it effects my perception, my experience of the book itself and mostly, my perception and experience of the story that it tells.

It is the “story” of an Italian photojournalist working for Vanity during the 2020 lock down in Italy: an authorial enough photographer to always have carte blanche for important assigments.

The story starts –  it is on the catoon box cover – with an image that represents the death of Carlo Giuliani.

Not only killed one, police tortured physically and psychologically many…

That day has been the most shocking day of my life till then, (I guess sept 11 shortly after was even worse )… the beginning of a new era of exceptional rules…all against freedom and with no care for the earth, in short…right?

I will remember those events as a sudden bitter shift that hit me and will remain like a permanent scar. I could not “not see” anymore!

I was hosting Alex and three other international photojournalists. They were in the street all day and the night they were editing photos to send to the international press. I was making coffees and cleaning the one-room mansarda… The day of the death of Carlo Giuliani, I also cleaned each step from bottom door to the sixth floor. Trying to stop crying at each fucking step!

I say now that that day has been my first day of “lock down”, in fact,  I was alone, locked inside at home for safety.

I was at the protest the day before, feeling peaceful messages of hope, feeling a global love, a joy, I was singing along and dancing Manu Chao…then brutality. Lies. Oppression in a big way. Like now.

Opening the box containg the book the first pleasure to me is the accuracy and beauty of the black and white;

The first picture? Is there for you to take it and move it and touch it with your hands! I love books that do that. It is the picture of a scarecrow.

“I see it, Alex, straight to point at start!” I will think later. Fear. And the question comes to mind: how fear works ?

#6603: Majoli’s under light black and white is no surprise, he affirms/confirms his technique: he knows exactly what he is doing with these digital images.

I am just awake, and my immediate thought is that I will never put those separate pages back into the sequence and to the sequence of folders in which it is conceived and put together, evidently by hand, one by one. Alex confirms that it is possible.

I know me a little…right now the pages are all mixed. But yes: there is big and central number ( 1 to …) on the retro. On the front, under the full frame images cm 30 x 40 there is a white line with the number of the scene;

For several years now Majoli has titled a selection of his images with the name Scene # …and a number. An objective reference. Yet, they are called scenes: something imagined, prefigured in some way.

Oper Aperta is a collective work; as in Off Broadway (a collective self-produced show, New York 2004) and more clearly now, there are not significant boundaries between photojournalism and art, fine art and photocopies, play and work or theatre and life, Alex would like to say. It is how you do things that matters, and how they work: we agree.

In my take, as in Off Broadway, Opera Aperta wants to awake you. Wants you to be contagious and committed in your need to express, touch, grasp! Up to you to find out how.

Immersed in a semi-darkness, like in a theater, you lose some of your self-consciousness going through the “body book” …and maybe you feel the contagion on you, yes, but intentionally it is the contagion of commitment, necessary commitment for freedom as wellbeing.

I follow one piece of advice: Just start, always start. Take a role.

Your way! Just “don’t get lost”…I hear Alex telling me … “in the name of love” I conclude, without thinking much anymore…

For Cesura and all sweethearts. Lorenza Orlando