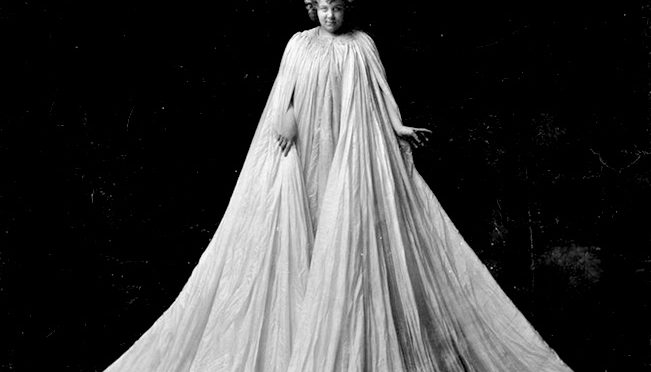 Loïe Fuller, the American modernist dancer known for her inspired use of dramatic lighting techniques, once tried to brighten the very clothes she danced in. Living in Paris at the turn of the 19th century, she was aware of experiments with radium which Marie and Pierre Curie were conducting–especially after they won the Nobel Prize in Physics in 1903.

The New York Public Library has in its collection one of Loïe Fuller’s notebooks: 59 pages titled “Lecture on Radium” written in January of 1911. “If Radium can bring to our vision those things which we cannot see (as it does the atom),” wrote Fuller, “its influence cannot be measured on materialists who say, ‘I’ll believe when I see.’ If it can show us the soul as it leaves man by registering it on the photographic plate, if it can be the means of photographing our imagination, so that the eye can see it, what will we not believe, we materialists who think that only things we realized with our human senses are real.” (from link )

Responsible for a #radical#renewal of #dance in the overcoming of academic formalism, Loïe Fuller anticipates the demands of the artistic avant-garde that would soon become established.

The transition from gas to electric lighting, which began in 1879, encouraged her studies on light, for which she was appointed a member of the French Astronomical Society.

“One of the first of many American modern dancers who traveled to Europe to seek recognition. Fuller supported other pioneering performers, such as fellow United States-born dancer Isadora Duncan. Fuller’s pioneering work attracted the attention, respect, and friendship of many French artists and scientists.

An #1896 film of the Serpentine Dance by the pioneering film-makers Auguste and Louis Lumière gives a hint of what her performance was like. (The unknown dancer in the film is often mistakenly identified as Fuller herself; however, there is no actual film footage of Fuller #dancing).

Fuller’s stardom owed nothing to the sexual glamour that, to this day, usually comprises the appeal of female performing artists. Fuller even managed to be openly lesbian while evoking virtually no titillation or disapproval in her public. Contemporary journalists tended to describe her personal life as “chaste” and “correct”, writing often of her relationship with her mother and rarely even mentioning her live-in female companion of over twenty years, Gabrielle Bloch.

#Experimenting is a form of #desire.

Fuller “was way more interested in making things happen than creating a name for herself.”
I am fascinated when, finding an element in an author that I love I let my self dig into it and develop it so that – as Agamben describes in his idea of interpretation – “it is not possible to distinguish between what is ours and what belongs to the author ”

Dive and let imagination do the job.